Shape is not at all a difficult concept to understand and appreciate.  After all, shape is at the epicenter in the description of form.  Intuitively shape is understood from our own physical experiences, from the beauty of the body, which we adorn and lust for, sometimes purely based on its shape.  Shape lends innate beauty in nature, functional value in physiology, molecular biology and chemistry, as providing relevance in geometry, and architecture.  Abstract concepts like “shaping an idea” for example carry  intellectual, scholalrly, literary and philosophical implications.

Georgia O Keefe an American photographer and painter is quoted as having said that “I found I could say things with color and shapes that I couldn’t say any other way – things I had no words for.”

Lewis Carroll said “When you are describing a shape, or sound, or tint; Don’t state the matter plainly, but put it in a hint; And learn to look at all things with a sort of mental squint”.  This quote has a sense of creativity, while the quote ‘The devil hath power to assume a pleasing shape” by Shakespeare has a more ominous message.

At an anatomical level, we are not unlike the ancient anatomists who struggled with the descriptors of shape and could only describe the form of anatomical structures by comparing them to known shapes in their environment.  Famous reference shapes were the moon and stars, foods, animals, plants, musical instruments, tools, weapons of war, boats, and letters of the alphabet.   Hooks are common: the hook of the hamate, uncinate process of the pancreas, or the falciform ligament all describe a characteristic curve.  The tibia is supposed to look like a trumpet, the navicular like a ship, the sella turcica like a Turkish saddle, and the deltoid muscle like the Greek letter delta.  Anatomists and clinicians have employed terms from nature’s bounty such as pear (or pyriform shape) for the uterus and gallbladder, almond shape for the ovary, tonsil and amygdala, and pea shape for the pisiform bone of the hand. While some of these names are quite helpful and have been retained in our modern medical minds, others have been forgotten.  Most doctors and laymen alike would be surprised to learn the origin of the word muscle – from the Latin word “musculus” which means little mouse reminding the ancients of little mice under the skin.

At a biochemical level shape of molecules is also highly important and relevant.  There is the linear shape of hydrogen, HCl, and CO2, the triagonal planar shape of BCl3  and AlCl3, the tetrahedral shape of CH4 and SiF4, the bent shape of H20, and the octahedral shape of SF6.  All have molecular consequence

“Our goal is to control the shapes of new materials with the same level of precision that we exercise when controlling the stereo chemical relationships in a natural products synthesis.”  said Joseph M Fox Assistant Professor of Organic Chemistry University of Delaware

Shape is difficult to quantify, and judgment is often invoked when calling it normal or not.  Despite our difficulty with defining the shape of structure, objectively it is of supreme importance in the diagnosis of structural disease since a minor deformity could be the earliest sign of disease.  If the diagnosis is made in the early stages then treatment can be more timely and more effective.

In clinical medicine there are instances where identifying abnormal shapes will lead to a diagnosis or a differential diagnosis.

As the patient walks into the office or is visited in a hospital room, the task of the astute clinician begins.  We are focusing on the shapes of health and disease, but of course the practiced expert is able to take in all the components needed for accurate evaluation.  The global shape of the patient is the first observation that begins the interaction, before a word has been spoken.  It may tell the whole story.  . The obese patient, asthenic patient, muscle wasting and muscle bound patient all have distinct shapes that are relatively easy to identify.  The presence of a kyphosis is easy to spot.  Thoughts of osteoporosis and compression fractures start to become checks on the list relevant conditions in the elderly.  Scoliosis in the young will bring a whole differential of birth defects, muscular dystrophy, cerebral palsy, or Marfan’s disease.  The patient doubled over in pain may have life threatening peritonitis, appendicitis, or an ectopic pregnancy.  Sometimes leaning forward like in pericarditis provides some relief of the pain.  The demeanor and body form in the depressed patient is in sharp distinction to the perky upright bright patient.

As the patient is greeted with eye to eye contact the astute physician takes in the shape of the face.  In Cushing’s syndrome the facies are described as “moon like” because of a rotund appearance caused by subcutaneous deposition of fat.  Acromegaly and gigantism are characterized by a protuberant jaw and thick features. A droop of muscles and unusual premature aging of the skin may speak to an excessive exposure to sun, excessive exposure to nicotine, or an excess of stress.  The triangular face with sunken cheeks, sunken eyes (enopthalmos) is the shape of severe dehydration originally described by Hippocrates 2,000 years ago in patients who were in the late stages disease and were close to death.  The bulging eyes of exopthalmos on the other hand should activate a quick look to the neck at the thyroid gland as a diagnosis of thyrotoxicosis is entertained.

As the patient is greeted with a handshake, the shape of the hands may also be a clue to a variety of diagnoses.  The large, strong, broad, thick spade like hand is characteristic of acromegaly. Short stubby fingers of almost equal length are seen in achondroplasia, a cartilagenous disorder, while clinodactyly, a curved shape to the fifth finger may be a benign normal variant but is also seen in patients with Down’s syndrome and other unusual genetic syndromes.   Clubbing of the fingers is an entity that was known to Hippocrates.  It is characterized by increased curvature of the nails and a bulbous appearance to the distal phalanx that has been called a “drumstick” deformity.  This sign is seen in chronic suppurative conditions of the lung such as cystic fibrosis and cancer of the lung, and cyanotic heart disease.  The barrel shaped chest is seen in emphysema, the diamond shaped murmur in aortic stenosis, and the water bottle shaped heart is seen in pericardial effusion.  The shapes of deformity and illness go on and on and make the study of form and function in health and disease so interesting and important in clinical medicine.

The pathologist has also used the shape of structure to describe disease as seen macroscopically as well as under the microscope.   The word cancer derives from the Greek word “kanker” which means crab.  The Roman physician Galen, is purported to have coined the term since he noted that the disease had a central rounded appearance reminiscent of the crabs body from which emanated irregular “veins” reminiscent of the crab’s legs.

The body of the crab is always the nodule or the mass, and the legs may be caused by tumor extending into the surrounding tissue, lymphatics or veins.  On the other hand one every shape on imaging that is crab like is not definitely a cancerous growth.  The suspicion is raised and the patient then requires a biopsy to confirm the diagnosis. Two examples below with the characteristic crab like shape both proved to be cancer.  Radiologists have preferred the adjective “spiculated” or “stellate” to describe this shape rather than the adjective “crab like”.  The reasons for this avoidance are uncertain, but possibly because the visual pattern is not absolutely pathognomonic for the diagnosis of cancer or simply because “spiculated” or “stellate” lesion is a more accurate description. 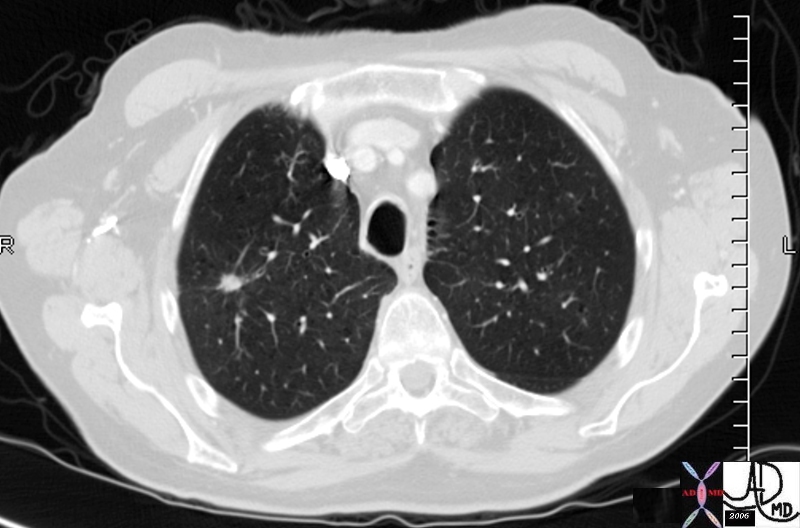 Cancer does not always look like a crab.  The morphology of a particular disease process depends not only on the disease process itself, but also on the tissue and organ from which it arises, the restrictions or freedom with which it is allowed to occupy space, and the pattern of growth that is innate to the biology of a particular malignancy.  A more common manifestation of colon cancer, for example, is growth and spreading within in the layer below the inner lining called the submucosa.  The initial space occupation occurs in a circumferential manner creating a broad band or belt around the bowel.  Progressive tightening and advances to obstruction. When barium is instilled into the colon, the shape created by the band of this cancer in the colon has been termed “applecore” deformity.  Based on the shape of the sigmoid colon there is almost no other differential diagnosis for this radiological finding but adenocarcinoma of the colon.  Narrowed lumen and irregular mucosa with heaped up edges on either end are characteristic of a malignancy.

The importance of shape in health and disease continues down to the cellular level.  Receptors in a cell membrane and the molecules that act upon them are highly dependent upon specific conformations.  Enzymes fit into their receptors and activate them just as a key fits into a lock.A lock and key morphology is the parallel drawn to our human experience.  They first have to fit, and then they can interact and be effective. If the shape fits the reactions follow  If the shapes do not fit, there is no go.     This is a “key” concept at many levels, in the world of biochemical interactions.

Shape of course plays an important role in cosmetic surgery.  The patient whose appears below had had a mastectomy for breast carcinoma .  Reconstruction mammoplasty was performed by bringing a skin and adipose tissue flap from her abdominal wall to her chest wall.   The intent was to retain her image as a woman with significant implications of psychological wellbeing. The aim of the surgeon was to create a breast that was similar in shape, size and character to her remaining healthy breast.

Thus shape plays a very important role in the assessment of structure in the preclinical disciplines as well as in the clinical disciplines from the level of the cell to the body, not only in health but also in disease.  It is not uncommon that a minor shape deformity may be the only clue and the only abnormal finding that will be the determinant of a diagnosis, and therefore treatment.  Shape holds tremendous implications at all levels of biology and medicine, from the small malignant bump on the pancreas, to the shape of a new drug that will fit appropriately into a cellular receptor.

Below we have listed some of the anatomical structures that have been named according to their shape.  There are many more that could be added.  The extensive use of defining a structure by its shape reflects the importance applying shape to characterize structure.

Sphericals in the Round

Educational Exercise – Approach to the Diagnosis of Lung Nodules

Challenge yourself with this image from a 28 year with elbow pain who fell on his elbow.  There are two findings created by shape deformities that allow one to make a diagnosis